How to Use History to Sell Innovation

Dip into any field of art—literature, painting, music, dance—and you’ll quickly discover that the concept of “originality” is problematic.

Was Shakespeare the most original playwright of his time, or just the cleverest borrower of plots and characters? Was Picasso an iconoclast, or by so obviously defying the “rules” did he also show them reverence?

When I was immersed in the world of literary scholarship, much of my thinking was shaped by theories of “intertextuality.” Intertextuality acknowledges that no imaginative production happens in a vacuum. Any form of human artistry invokes the collective imagination, both historical and contemporary.

As a literary scholar, I came to view each text I encountered through a prism of earlier texts, each contributing to the meaning of the writing in some way. In certain instances, the intertextuality was clearly purposeful, as evidenced by the author quoting or alluding to an earlier work. In other cases, the relationships among texts appeared more subtle, as layers of cultural bedrock beneath the work’s surface or as faint echoes of half-familiar voices.

Either way, at the end of the day, viewing a novel or poem through the lens of intertextuality showed me what an oversimplification it is to praise an artistic work for being “original.” Novelty isn't self-generating; it is, in many ways, a communal act. The new always hearkens back to the old, and the seemingly solo artist is really part of a creative network.

In my work with researchers and founders, I often think back on the habits of intertextual reading I used to practice. Just like literary production, innovation depends on a web of previous wonders. Once you recognize that, you gain access to an array of metaphors and language that can help you explain what you’ve created, how it works, and why it matters. 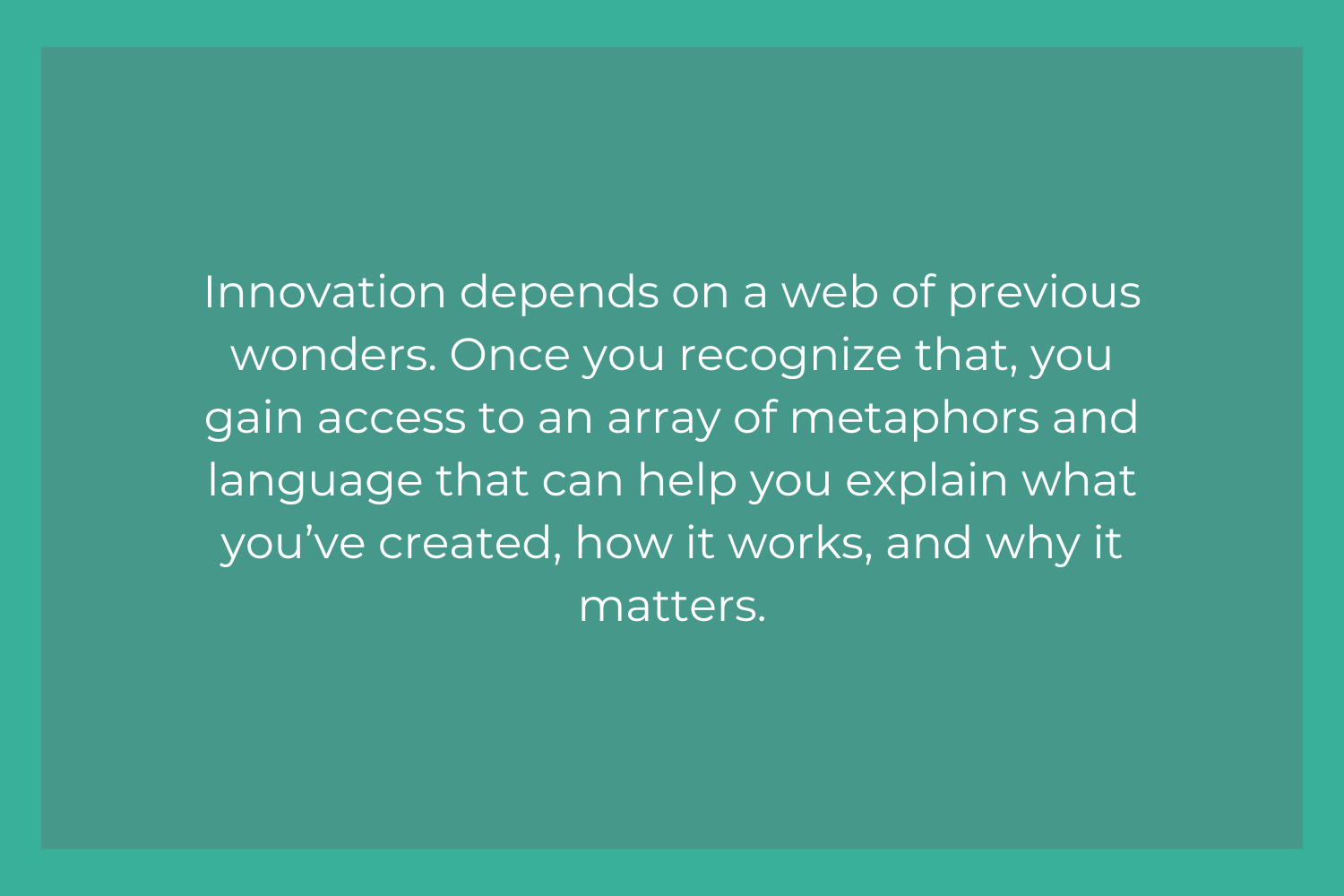 The risks of overaccentuating the new

When you’re pitching an innovative solution to potential investors or customers, of course you want to emphasize what a breakthrough you’ve engineered. You need to show what makes your invention different, and that usually means showing what’s new about it.

At the same time, if you spout too intensely about “leading-edge” or “revolutionary” technology, your enthusiasm may backfire. Yes, you want to whet your audience’s appetite for the novel. But you also want to feed their desire to anchor the new in the familiar framework of the old.

To absorb new knowledge, our brains need such a framework. We make sense of incoming information by filtering it through what we already know, looking for connections that will help us interpret strange data. Without such connections, we struggle to understand and retain new perceptions and ideas.

When you’re caught up in pushing the boundaries of the known, it can be easy to overlook or underestimate the value of referring to the conventional. But invoking the familiar is often the fastest way to get your audience excited about your innovation.

A common mistake many innovators make is to assume that their innovation stands alone on the frontier of the New. In reality, name any breakthrough, and I’d be willing to wager that you can find an antecedent for it, a shared reference to help bridge the gap between your expertise and your audience’s prior knowledge.

This principle of creating a historical frame for an innovation came to my mind forcefully last week, through a most unlikely source—a novel by Charles Dickens.

Dickens, as you may know, is famous for his detailed depictions of mid-nineteenth-century life in London. Near the beginning of The Old Curiosity Shop, he describes how a profligate young bachelor goes about ordering and digesting a meal of boiled beef.

The young man, Mr. Swiveller, sends a message (via a servant, we assume) to an “eating-house” at some distance from his rented rooms. (We’re told that the distance is necessary because Swiveller has incurred debts at the neighborhood eatery and so can’t order from there.)

Once the message has been delivered, it is followed by “the speedy arrival of a small pewter pyramid, curiously constructed of platters and covers, whereof the boiled-beef-plates formed the base, and a foaming quart-pot the apex; the structure being resolved into its component parts afforded all things requisite and necessary for a hearty meal.”

This feast is made possible on short notice, without any cash exchanging hands. Since the meal is served on pewter plates, it generates little waste. The “curiously constructed” tower of dishes, and the rapid delivery process, seem a marvel of Victorian ingenuity, an app-free, plastic-free version of Skip the Dishes.

Except that, for many Londoners in the mid-1800s, ordering in wasn’t a luxury. It was their daily habit, as it is in some parts of the world today where not everyone has access to individual cooking facilities.  In 1840, when The Old Curiosity Shop first launched as a serial publication, it was also routine for a message to travel rapidly from one part of the city to the other. The postal service delivered mail to homes twice a day, and servants and young boys were readily available to run a note across the street or across town.

So with this historical perspective in mind, imagine that you’ve invented an app to rival Skip the Dishes. Dr. Who has heard about your innovation, kidnapped you, and taken you back in time to 1860. He wants you to demonstrate your innovation to lodgers in a London rooming house.

What a daunting task! Your audience has no concept of a computer, let alone a smartphone. The Internet won’t be created for another two centuries. And aside from chicken dinners and curry plates, many of the dishes on the app’s menus are completely foreign to the British palate.

Where do you begin? It might be tempting to start with the “basics”: explain what a computer is and how it operates, and then give an overview of the Internet and wireless communication. With those key principles in mind, you could then explain how the app works, click by click so to speak.

Such an approach may sound scientific and logical, but it will almost certainly baffle your audience. Remember, they’ll also be struggling with your 21st-century accent and staring at your funny clothes while they try to absorb what you’re saying.

A smarter approach would be to start with what your audience knows, the process of ordering food from the local eating-house or inn. Establish this historical frame and then introduce some of the issues with the current process, such as spillage, cold food, and customers who refuse to pay.

To underline this last point, you might share the story of Mr. Swiveller, who made a practice of deceiving landlords with the promise of future payment that was never delivered. Without any means of verifying his credit from one neighborhood to the next, he could swindle dozens of food providers before getting caught.

Once you’ve established this common, historical ground with your audience, then—and only then—is it time to enlighten them about the marvels of your mobile app. As you explain the app, peg each function you describe to the familiar frame, the known process for ordering a meal.

Do this, and you’ll easily have your audience eating out of your hand, so to speak.

The gloomy philosopher of Ecclesiastes (one of the Bible’s “wisdom” books) observes, “What has been will be again, what has been done will be done again; there is nothing new under the sun” (Ecclesiastes 1:9-10).

As an innovator, this may be exactly the kind of statement that gets your blood pumping. You thrive on seeking out new discoveries and making the impossible possible. Barriers are meant for breaking.

But let’s give the ancient pessimist his due. Innovation doesn’t happen in an isolated moment in time, and the audience you’re trying to woo doesn’t exist in isolation either. Give history its due, and you can make it work for you.

In many situations, including pitches to investors and strategic partners, the quickest path for taking people from perplexity to understanding is a historical route. Enable your audience to view your revolutionary solution through a frame they can recognize and relate to. Invite them into tomorrow through the portal of the past, and they will be eager to follow you forward.

For more insights to help you reach your target audience, check out the Clarity Studio blog at www.claritystudio.ca/blog.