Why I never write killer proposals

Stand-up comedy is a brutal career choice. Not only do you have to work late nights in seedy venues, but you also have to “kill” your audience, night after night. A successful comedian boasts, “I knocked ‘em dead tonight, man! I totally slayed them.”

Unfortunately, many business writers tend to approach persuasive writing with the same violent mind-set. For example, I was once asked to design a course called “Killer Writing.” The executive championing the project described himself as “a big game hunter,” and his idea of a compelling slide deck was one that shot the client’s resistance down.

But gunning for your readers isn’t a persuasion strategy—it’s a coercive tactic, one that can result in short-term results but usually fails over the long term. You can force a “conversion” at gun point, but how likely is it that a real faith has taken root?

Faith, which is another word for trust, forms the essence of genuine persuasion. Before they’ll buy what you’re selling, people must develop faith in you, in your intentions, and in your ethics. If you don’t quickly show that you’re a sincere person who’s sincerely interested in the well-being of your audience, your pitch will flop, no matter how polished it is. 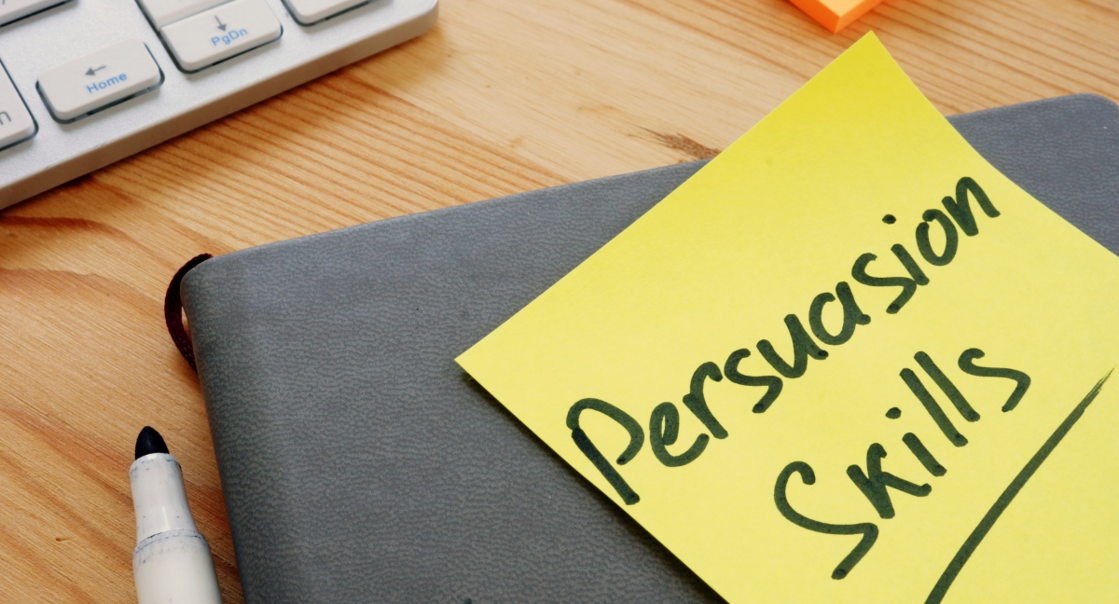 This is true whether you’re selling products, services, your reputation, or your innovative ideas. Yet it’s amazing how many persuaders insist on acting like Crusaders, determined to take the field by force rather than through negotiation. Their hero is Sun Tzu, the inventor of strategic warfare, and their hostile methods involve capturing and subduing their target audience. (The competition, of course, they shoot on sight.)

My hero, on the other hand, is Arlene Dickinson, the Canadian marketing guru, venture capitalist, and former star of the TV competition Dragon’s Den. Her book Persuasion, which draws on a lifetime of stories from Dickinson’s personal and business experiences, describes an approach she calls “principled persuasion.” The three pillars of this approach , she says, are authenticity, honesty, and reciprocity. Persuasion is ultimately not about a quick win but rather about relationship building.

Dickinson is a brilliant storyteller, and her stories show how, time and again, she’s learned the lesson that effective persuasion depends on emotional connection and a win-win attitude. The only “enemy” in the persuasion process, she says, is your own ego: “If you’re concerned with proving how intelligent and accomplished you are, there’s a very real risk of turning off the people you’re trying to persuade.”

In other words, your audience can easily detect posturing. They can tell a seasoned knight from someone who’s swishing his sword around for theatrical effect. And they can sense when you’re more interested in pursuing your own gain than you are in helping them achieve their goals.

That’s why I never write “killer” proposals, proposals that aim to devastate the audience with their technical brilliance and their sophisticated style. Instead, I write proposals that invite trust, mutual respect, and collaboration. I try to live up to Dickinson’s measure of a good persuader: “They help people figure out how to do things together with a shared sense of purpose… they seek collaboration, not domination.”

Of course, I also want my readers to realize the brilliance and sophistication of the solution I’m proposing. So how do I communicate technical information while cultivating a relationship? Here are four key principles I follow:

1. Seek first to understand (as Stephen Covey would say). I include a section describing my understanding of the current situation, echoing as closely as I can language I’ve heard the client use. This shows I’m listening to their concerns, not just firing a pre-fab solution at them.

2. Play to the tune of selected benefits, not universal features. Rather than singing the praises of all aspects of the solution I’m proposing, I emphasize the specific features that align with the concerns I’ve heard from the client. By so doing, I present the solution in terms of its practical, business-oriented benefits.

3. Use a conversational style. Even when I’m required to write in the third person (when I can’t use I or we), I build trust by humanizing my writing style. That means using short sentences and everyday words. It also means avoiding business jargon and defining any necessary technical jargon in terms my audience can easily understand.

4. Pitch to values. You’ve probably heard that every proposal should be grounded in a value proposition. But when you’re deep into describing a technical solution, it can be hard to remember that a “value prop” must resonate with the audience’s values, which may not be the same as your values. For instance, you might value an app for its ability to integrate with legacy systems, but your client might value it for the intuitive interface of the potential cost savings it will bring about.

When we’re in the midst of a “pursuit,” it can be easy to fall into the language of hunting and war. But ultimately, the key to influencing people, as Dale Carnegie knew, is to “win friends,” clients who aren’t just converted for a day but become long-term partners in mutual prosperity.